Year 5’s Work on ‘The Highwayman’

Interpretation of the ‘The Highwayman’ by Year 5

Last term Year 5 took on the daunting task of reading, analysing and

The poem, set in 18th-century rural England, tells the story of an

unnamed highwayman who is in love with Bess, an innkeeper's daughter.

It is a tragic tale of romance and betrayal,

packed full of imagery and figurative language set over 17 stanzas.

Year 5 read the poem, taking note of the mood created by the poet’s specific use of language and rhyme:

‘The poet’s use of imagery has created a powerful setting

by the use of metaphors and repetition. ‘

The moon was a ghostly galleon tossed upon cloudy seas’

is an effective metaphor because it creates an ominous and foreboding atmosphere’.

Also, it creates a vivid image of a misty, desolate night

with a pale, bleached galleon being flung across the merciless ‘seas’.

and it creates a foreboding atmosphere.

The pace and momentum the poem gathers also replicates a horse galloping’.

They created their own version of the opening stanzas, focusing on figurative language and imagery.

The wind was a flood of nightmares between the raging trees,

The mood was a coin flicked upon the night’s darkness,

The road was a slithering snake over the mystic mountains,

The highwayman galloping up to the old inn-door.

The gusts were powerful drafts through the windblown trees,

The moon was a shining jewel flung amongst starlit seas,

The trail was a gleaming rope, twisting over the darkened plain.

And then all could hear him riding,

He came on his rose a-riding,

To the beat of his heart’s refrain.

And black in the dark ancient inn yard a stable-wicked squeaked,

Where Tim the Ostler overheard,

His face was pale and peaked.

His eyes were pits of doom, his hair like rotten hay,

But he loved the landlord’s daughter,

Stupid as a snake he heard the thief say…

One kiss my lovely sweetheart I’m after a gift to-night,

But I will return to your arms, with some jewels before the morning light.

Yet if they foil me and chase me through the day

Then keep an eye on the moonlight,

Watch for me by the moonlight,

I’ll come to thee by the moonlight, though hell should block the way.

Finally, the students paired their created stanzas with their own visual representations. This further emphasised the idea that, through careful selection of words and figurative language, authors and poets have the ability to create new worlds for their readers. This (hopefully) gave our pupils a new appreciation of language, reading and writing. 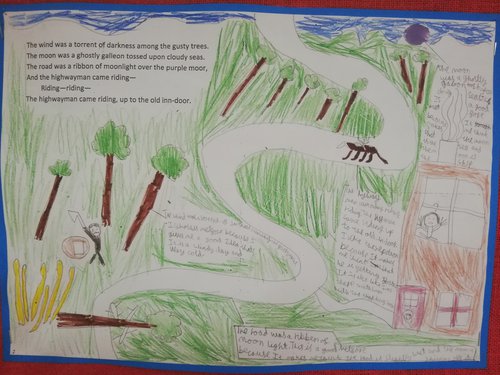 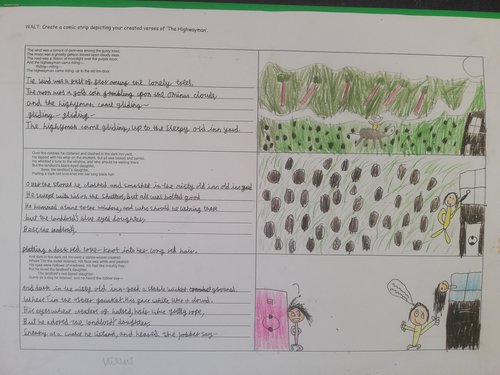